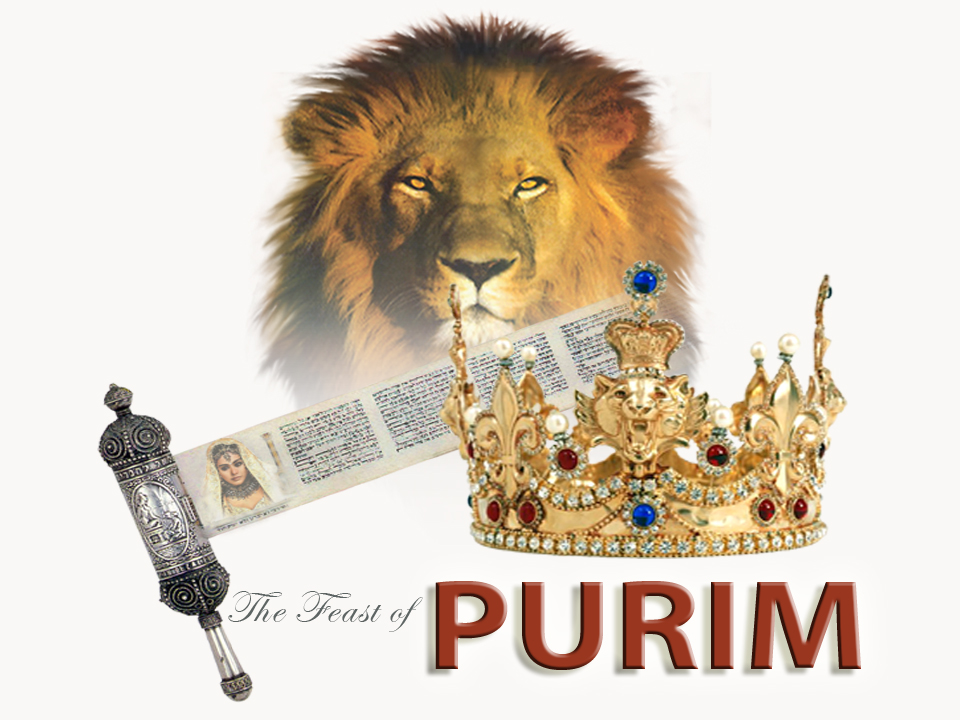 Purim is the Hebrew word for “lots”. “So they called these days Purim, after the name Pur” (Esther 9:26). The

people in the Persian Empire were to be killed. Purim is also referred to as “The Feast of Esther” and

“Mordecai’s Day” and commemorates the deliverance of YHVH’s people. This is a joyous celebration of

YHVH’s faithfulness to his people.

Purim is the last feast of the biblical year, taking place on Adar 14th, (late February or March) exactly one

month before Pesach (Passover). Purim is not one of the feasts given by YHVH in Leviticus 23, but it is still a

biblical feast and one of the best-known Jewish holidays added since the time of Moses.

King Ahasuerus (Xerxes I) reigned over the Persian Empire during the zenith of its power and glory. He

became displeased with his Queen Vashti and had her banished from the kingdom. So a decree was issued

someone to take Vashti’s place.Among those brought before the King was the young Jewish girl Hadassa

(Esther). She found favor with all those around her and the King “loved Esther more than any of the other

young women” (Esther 2:17). Through her, Esther’s uncle Mordecai was able to stop a plot against the King

During this time the evil Haman, was rising to power within the kingdom and was promoted to the position of

prime minister over all the other princes, answering only to the King himself. Haman hated the Jews,

especially Mordecai. Because of his love for YHVH, Mordecai would not obey the King’s command to bow

down in Haman’s presence.

With the help of his position, Haman influenced the King, in allowing him to pick a day that all Jews would be

annihilated. He did this by casting lots (Pur) and the lots fell to Adar 13. An edict was sent out throughout

the Empire that all Persian citizens were to destroy their Jewish neighbors and plunder their possessions.

know that Esther was a Jew). It was forbidden for anyone to go before the King uninvited, even the Queen,

and the penalty was death. Esther called for all the Jews in the land to join her in fasting and prayer for 3

After the 3 days of fasting, Queen Esther went uninvited before the King. When the King saw her, he

remembered his love for her and stretched out his scepter in order to spare her life. He offered her anything

she desired, up to half of his kingdom. She asked only that the King and Haman join her for a banquet. While

there, she asked that they join her again the next night for a second banquet where she would make her

During this time, the King was reminded of Mordecai’s faithfulness in foiling the attempt on his life. Since he

had not yet honored him, the King charged Haman with the duty of putting a royal robe on Mordecai and

parading him through the streets on one of the King’s horses. This angered Haman, and caused his rage

against Mordecai to grow stronger. Haman built a gallows on his own property, specifically for the time when

he could take out his revenge on Mordecai.

After this humiliating day, parading his enemy around on the Kings horse, Haman was looking forward to the

honor of a banquet with the King held by the Queen. The evening only got worse. Esther begged for her

people be spared from those that plotted to destroy her people. Not knowing her Jewish heritage, the King

asked who would want to destroy her. She named Haman. The King was so upset he stormed from the

room. On returning he found Haman pleading for his life, but mistook his behavior as attacking his Queen.

He had Haman hung on the very gallows that he had prepared for Mordecai.

Since a King’s edict could not be revoked, the King gave Mordecai Haman’s position and allowed him and

Esther to send out a new edict to all the Jews in the kingdom, telling them to defend their families and their

possessions on Adar 13, the day that was marked for their destruction.

YHVH placed Mordecai and Esther in a specific place and time, and their obedience and courage prevented

the destruction of the Jewish people. You can read the complete account in the Book of Esther.

Time of Gifts: It is customary during this time to give gifts of pastries and fruits to friends and relatives. It is

also customary to give charity gifts to needy individuals so that they may enjoy this festival.Time of Food:

Purim is a time of special foods and feasting! The most common food is a triangular pastry filled with a

that Haman is said to have worn.

Time of Gladness: During Purim, people will dress in disguise in remembrance of Esther keeping her true

identity from the King. There are also noise makers that are used during the reading of the record of Esther.

Whenever the name of Haman is mentioned, listeners boo and hiss and make all kinds of noise in order to

blot out this name. Whenever Mordecai or Esther’s name is read, listeners cheer and shout praise.

Purim is a time to remember the defeat of YHVH’s enemies and the deliverance of YHVH’s people.

YHVH delivers them out of the hands of the evil one.We are also to remember that even when we don’t

understand our circumstances and the situations that we find ourselves in, when we follow YHVH, he places

us in a specific time and place so that His will can be done in our lives and the lives of those around us. 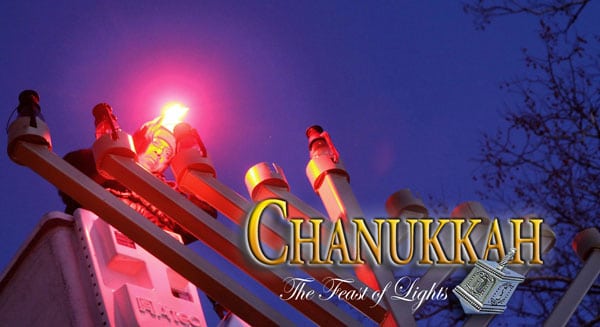 THE FEAST OF DEDICATION

Chanukkah, which means “Dedication,” is an 8-day celebration commemorating the rededication of the

Temple following its desecration by the Greeks army. Chanukkah is also known as the “Festival of Lights”

only one day’s worth of oil.Chanukkah begins at sundown on the 25th of the Hebrew month of Kislev –

typically in the month of December. For 8 days, a candle is lit at sundown representing each day. On the first

night one candle is lit, then two on the second and so on until eight candles are burning on the final night.

Around 333 BCE – Greek forces led by Alexander the Great, conquered the entire known world including the

Babylonian empire which Judea was part of.When Alexander died, his empire was divided among four

generals. Judea fell under control of the ruthless general, Antiochus IV. Antiochus referred to himself as

“Epiphanes” or “god (Zeus) made manifest”. He outlawed the Jewish faith, the worship of Jehovah and

forced assimilation of the Greek culture upon the nation, with all its pagan rituals and worship of false gods.

Many courageous men and women boldly stood against their oppressors; the most famous was an elderly

priest, Mattathias and his five sons “ the Maccabees”. A pivotal confrontation erupted in their small village of

Modin that sparked a revolt.

Grecian soldiers had built an altar to Zeus in the village and ordered Mattathias to sacrifice a pig upon it.

Mattathias boldly refused! When an apostate priest approached the altar to proceed with the sacrifice,

Mattathias grabbed an officer’s sword and slew both the solider and the apostate priest. His sons seized the

moment, slew the remaining soldiers and destroyed the pagan altar. Along with the faithful of the city they

fled into the Judean hills and began a 3 year war to reclaim their country.

Within the first year of war, the aged Mattathias grew sick. On his deathbed he passed leadership to his

oldest son, Judah Maccabee, “the Hammer”. Though greatly outnumbered by the better trained and

equipped Greeks, the Jewish rebels struck with guerrilla warfare. After three years, the Maccabees gained a

stunning victory over the Greek army.

Victoriously re-entering the city they discovered the Temple gates burned, the courtyards overgrown with

weeds and an idol of Zeus erected in the Temple. They immediately began cleansing and restoring the

According to tradition, the Maccabees found only one small container of unpolluted oil in the Temple… just

enough to supply oil to the Menorah for one day. It would take 8 days to properly prepare more oil.

Miraculously, this oil burned for 8 days until the new supply could be consecrated.

Today Chanukkah is observed by nightly lighting a special 9-branched menorah called a “Chanukkiah.” The

ninth candle is the “Shamash or servant candle.” The Shamash stands higher than the other eight candles

and is used to light the others. To commemorate the miracle of the oil, fried foods are typically eaten. The

most common are latkes (potato pancakes cooked in oil), and jelly-filled doughnuts.Because the Jews were

forbidden to study Torah during the days of Antiochus, they developed a ingenious way to openly study while

appearing to the Greeks to be gambling. Using a 4-sided top, called a “dreidel”, they would put money in a

pot, spin the dreidel but discuss Torah. Today the dreidel has one of the Hebrew letters nun, gimel, hey or

shin on each side. These stand for a “Great Miracle Happened There.”

May this miraculous “Season of Lights” illuminate you with the wisdom and grace of the Almighty GOD.