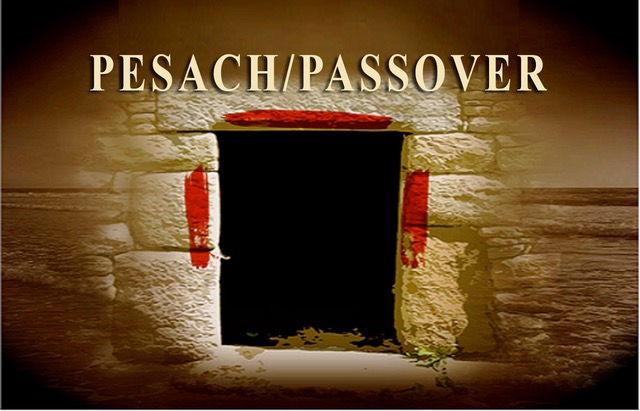 Pesach (Passover) is the first of the seven feasts of the

LORD that GOD proclaimed holy and ordained the children of

Exodus 12:14). It is a festival of deliverancefrom physical

message for today. It is foundational to our understanding of

the LORD’s Supper, the Upper Room and even the MESSIAH’s

Pesach is a one-day feast, immediately followed by the

seven-day Feast of Unlevened Bread. The two feast are

(Passover). GOD ordained that Pesach be observed each

year on the 14th day of Nisan (March/April). So awesome

was GOD’s deliverance that HE altered Israel’s religious

calendar to reflect the month of Nisan as the new beginning

(first month) of their religious year.

Pesach celebrates the deliverance and mass exodus of over

2 million Hebrews and mixed multitude from the tyranny of

Egypt. Through HIS servant Moses, GOD displayed many

miraculous signs proving HIMSELF in the eyes of the

children of Israel and all Egypt, to be GOD Almighty.

Confronting Pharaoh and all his mystics, HE openly revealed

neither they nor their false  gods, in whom they had placed

their confidence, had any power at all. HE made it clear that

it was HE, and HE alone, who was and is the ONE true and

Almighty GOD, Creator and sustainer of all life and

everything that exists! It was the final plague in which death

in a single night, entered into the homes of all the

unbelieving throughout the land claiming the life of the

“passed over” (Pesach) the homes of all those who believed,

and had followed GOD’s instructions. It was by their

obedience and the sacrifice of the Pesach (Passover) lamb,

that GOD HIMSELF stood between them and death,

preserving the lives of HIS people and redeeming them from

They were instructed to keep Pesach annually as a memorial

of their deliverance throughout all their generations (Exodus

12:25). Three of the key elements to be eaten during this

time are: Lamb, representing the sacrifice of their

sinlessness of the sacrifice and Bitter herbs reminding them

of the suffering of they endured during their time of

bondage. Another integral facet of the Pesach service or

Seder (Order) as it’s called, is the retelling of the miraculous

The Seder is rich with symbolism of GOD’s complete

redemptive plan for all mankind. Ultimately, it

our Pesach (Passover) Lamb. The prophet Isaiah spoke of

the coming Messiah as an innocent, pure lamb upon whom

the Sin of the world would fall in place of the people. He

would be the One who, with great bitterness of suffering and

death, would shed His blood to provide the greater

deliverance for all from the bondage of sin. Apostle Paul

us to keep this feast in sincerity and truth (I Corinthians

The Feast of Unleavened Bread is a reminder

of GOD’s miraculous deliverance of the children of Israel

from Egyptian bondage. The second of the seven biblical

feast is Hag Hamatzot, named after the bread required to be

eaten during this time which is Matzah or “unleavened

bread”. It recalls when the Hebrews fled from Egypt during

the night of deliverence, there was not even enough time for

their bread dough to rise. So, this seven-day feast in which

unleavened bread is eaten commemorates the haste in

which they left Egypt in freedom.

This Festival is observed in the month of Nisan (March-

April). It begins on the 15th of Nisan and lasts for seven

days. Since it immediately follows the Feast of Pesach

(Passover), the two are often blended together and simply

referred to as the feast of Pesach.

GOD established both Pesach and the Feast of Hag

Hamatzot (Unleavened Bread) prior to the other feasts of

Sukkot (Tabernacles), in which GOD required all Jewish men

to present themselves before HIM in Jerusalem.

baking powder) is used to produce fermentation in bread

dough and cause it to rise. During this festival, not only is

leavened bread not to be eaten, but, all leaven has to be

removed from the home entirely.

Quite often, sin is depicted in scripture as “leaven” (Matt

or have crept back into our lives. It is a time to focus on

laying aside even the tiniest of sins that would eventually

weigh us down, hindering us from being all that GOD would

have us to be 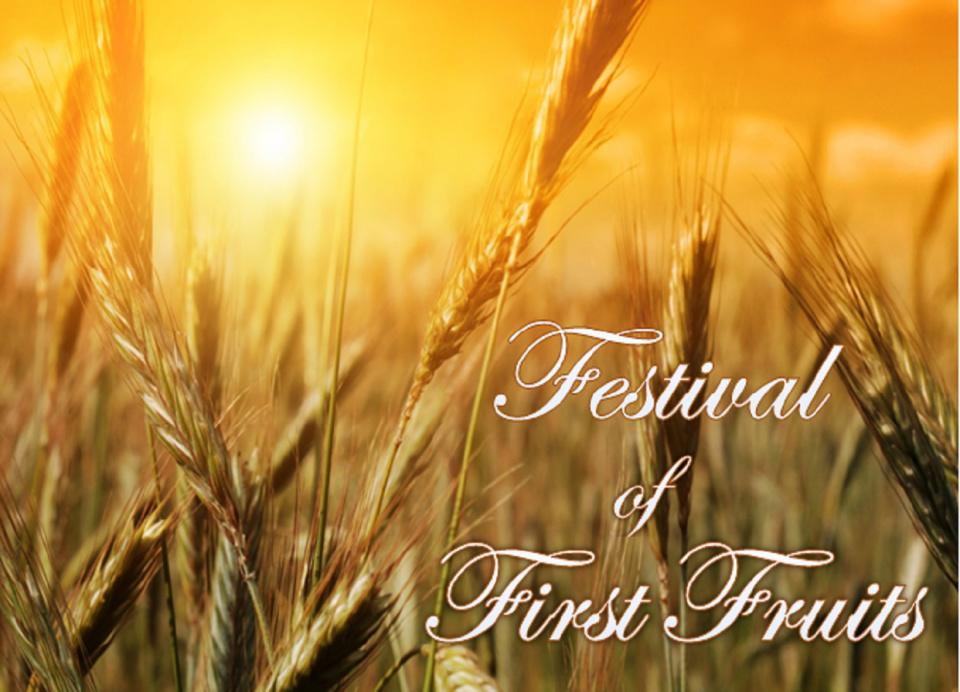 Firstfruits or Sfirat Haomer (Counting of the Sheaf or Omer)

signaled the ripening of barley grain in Israel. Barley was the

first grain ready for harvest after the winter planting.

Firstfruits, like the principle of the firstborn, (either man or

beast) belong to GOD. A firstfruits is a time of looking

forward with anticipation for what is yet to come. For the

sheaf of barley represented the whole harvest to come. It

served as a pledge to the faithfulness of GOD.

Firstfruits is the 16th day of Nisan (March-April) and is

considered a Sabbath as well among the feasts of Passover

An elaborate ceremony consisted of lifting the sheaf of grain

high in the air and waving it before the LORD and

acknowledging HIS blessings. There was an elaborate

processional into the Temple filled with music and singing

and dancing. Firstfruits is also a time marker, as a “count-up”

to the Feast of Weeks or Shavuot (Pentecost). Beginning

with Firstfruits, forty-nine days were counted and on the

Firstfruits, contains a powerful depiction of the resurrection

of Messiah. It speaks of a bountiful harvest – the grain of

wheat that fell to the ground and died, but rose to produce a

third day of Pesach (16 Nissan) to become the firstfruits of

all those who die trusting in HIM for their resurrection. As

declared in I Corinthians 15:20: “But the fact is that the

Messiah has been raised from the dead, the firstfruits of

those who have died.” YESHUA’s resurrection is the

guarantee or pledge of that final great harvest! 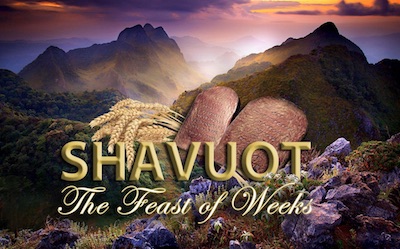 Shavuot is a time to thank YHVH (GOD) for HIS physical

provision by bringing HIM the firstfruits of the wheat harvest.

YHVH’s Word. It was during Shavuot that YHVH (GOD) gave

HIS people the Torah at Mt.Sinai. This is also a time to

celebrate the HOLY SPIRIT. It was during this time that the

HOLY SPIRIT was poured out on the early believers. This is

one of three feasts that YHVH (GOD) decreed that all

Israelite men were to present themselves at the Temple in

Jerusalem to meet with HIM.

Shavuot is observed in the late spring, the sixth day of the

month of Sivan (May or early June), which is  fifty days from

days between The Feast of Firstfruits and Shavuot is

referred to as “The Counting of the Omer”(Hebrew for

Shavuot is also known by several other names throughout

from The Feast of Firstfruits until Shavuot. It is also referred

the day that the firstfruit offerings of the summer harvest are

presented. The outpouring of the HOLY SPIRIT commonly

known as Pentecost, like the giving of the Torah,  occurred

It is a widespread practice to eat milk and honey during

Shavuot as a reminder of the Torah, since the word of YHVH

is like milk and honey to the soul. Enjoying cheesecakes and

other cheese filled pastries are common during this time. It

is also customary to bake two loaves of challah on Shavuot

to represent the two loaves offered in the Temple and the

two tablets of the Torah received by Moses on Mt. Sinai.

It was during Shavuot, after Yeshua’s death, resurrection and

ascension, that the disciples experienced the outpouring of

the HOLY SPIRIT (Acts 2). The sound of a powerful wind and

the tongues of fire would have been reminiscent of what the

Israelites experienced at Mt. Sinai when YHVH made HIS

holy utterance got the attention of the crowds that had come

to Jerusalem to celebrate Shavuot. After Peter shared about

how YESHUA fulfilled the prophecies of the Scriptures, he

urged them all to repent and some 3,000 trusted in the Lord

Back to GOD's Times
error: Content is protected
X